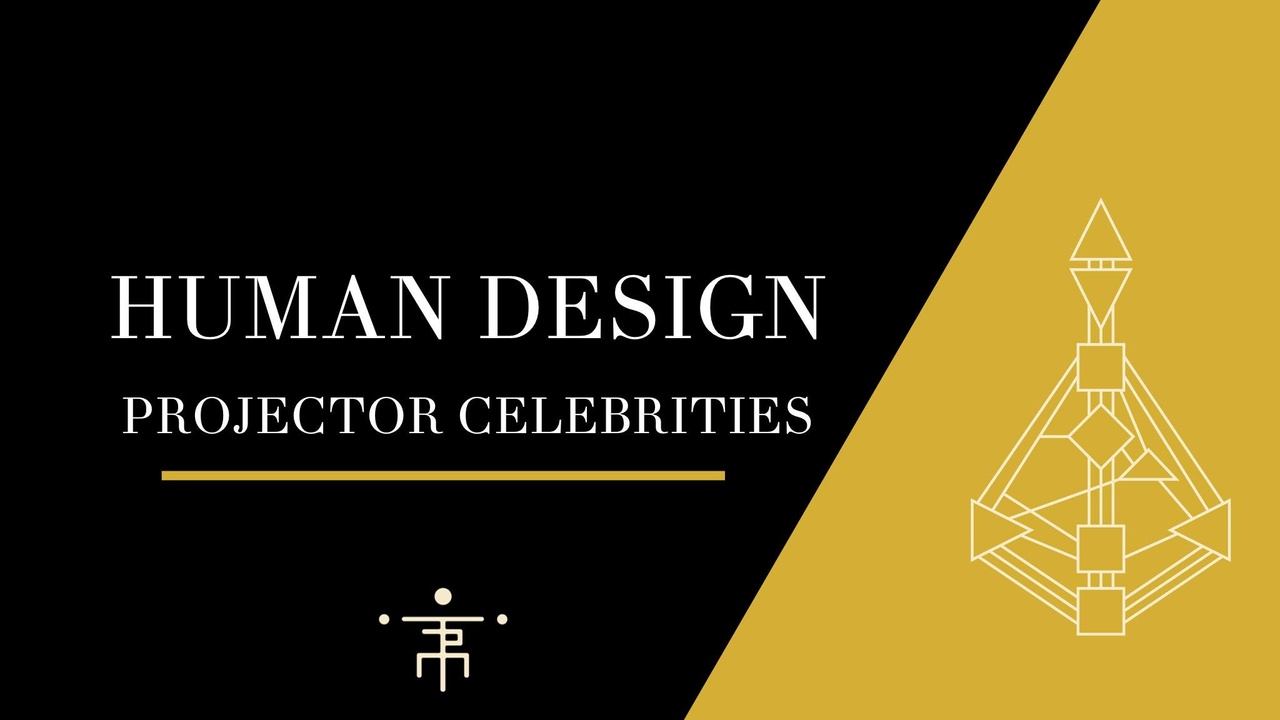 And what we will see in the future is many many more Projectors rise into the spot light because it's at this time in history Projectors are said to take on HUGE roles of influence in society.

So firstly... What is a Human Design Projector?

Projectors have an absorbing and focused aura, which enables them to deeply know their environments as well as the people within those environments. 20% of the population are Projectors and they are here to GUIDE, mainly the Generators, in how best to use their abundant energy.

That being said, it is no coincidence that some of the biggest leaders in history have been Projectors, as we are here to Guide. (Some Human Design Projector Celebrities/Leaders Include: Barack Obama, John F Kennedy, Queen Elizabeth II, Nelson Mandela).

(Please Note* This Blog is to outline Human Design Projector Celebrities. We understand many people have strong views and opinions with some leaders, we hear you and we understand. The below blog is not reflective of any personal views or intended to provide an opinion of the owner of the chart. You are welcome to agree, disagree, and hold your own views on the person. We are focused on the HD.) 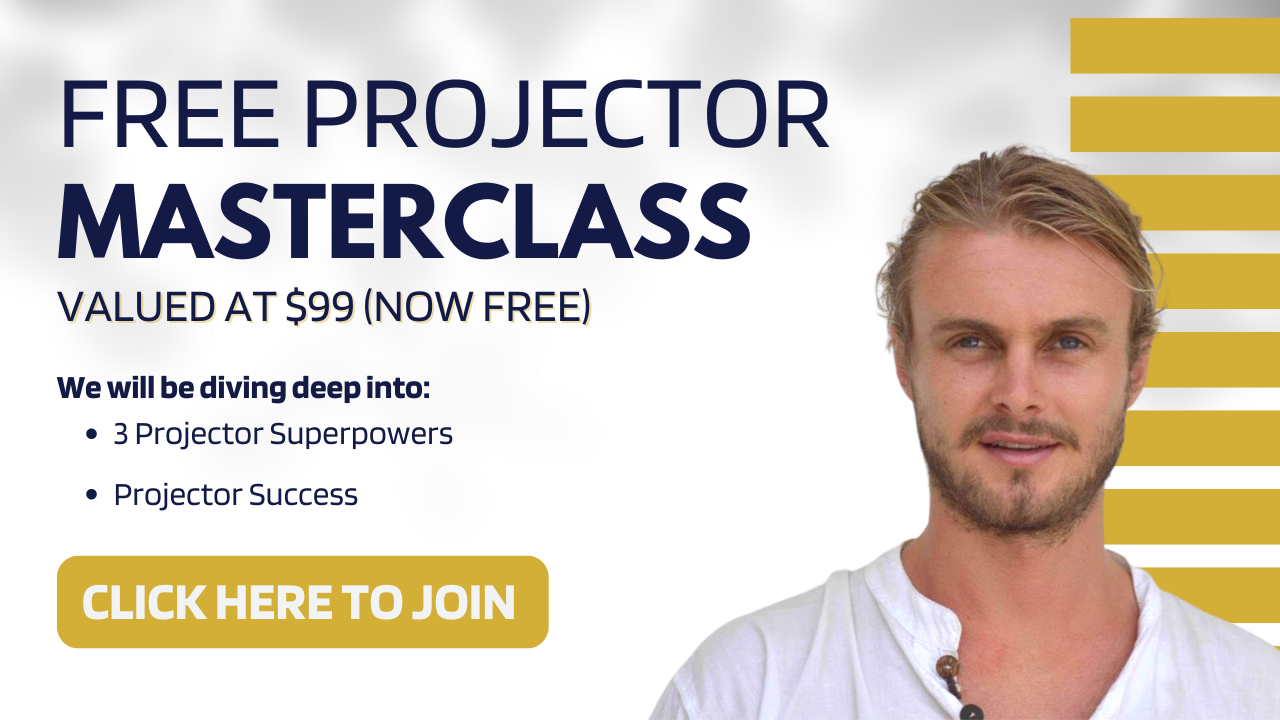 Below we will go into more detail about on some other Projector Celebrities and their charts. 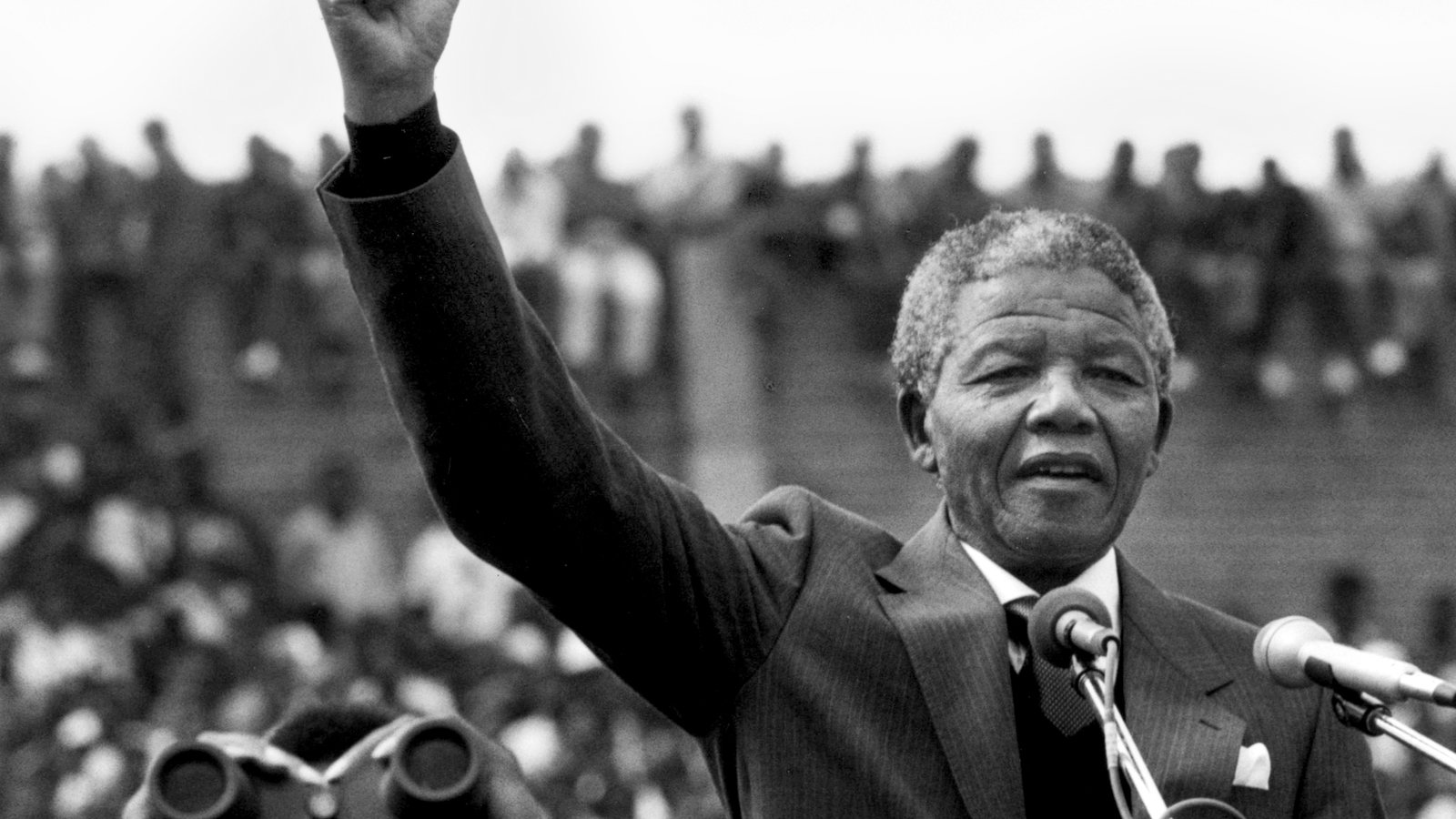 You can really see the former President of South Africa Nelson Mandela, 5/1 profile shine here. Being ‘on stage’ and being seen is energetically correct for a 5/1, so too is the ability to be a fierce leader. He stood up for what he believed in and was extremely knowledgeable, thanks to the wealth of knowledge he had at his fingertips from utilising his Line 1 energy of investigating and researching.

His Line 5 energy attributed to his powerful presence, he definitely had the ability to draw people in and he was an inspirational guide to hundreds of thousands of people globally.

The line 5 being conscious can also draw in a lot of projections and no doubt he had MANY throughout his lifetime.

Interestingly enough, Nelson Mandela had no defined ‘motors’ (sacral, root, solar plexus, heart) defined in his chart, however the very fact he was invited into leadership by the people who wanted his guidance gave him the energy required to play his role at a very high level. 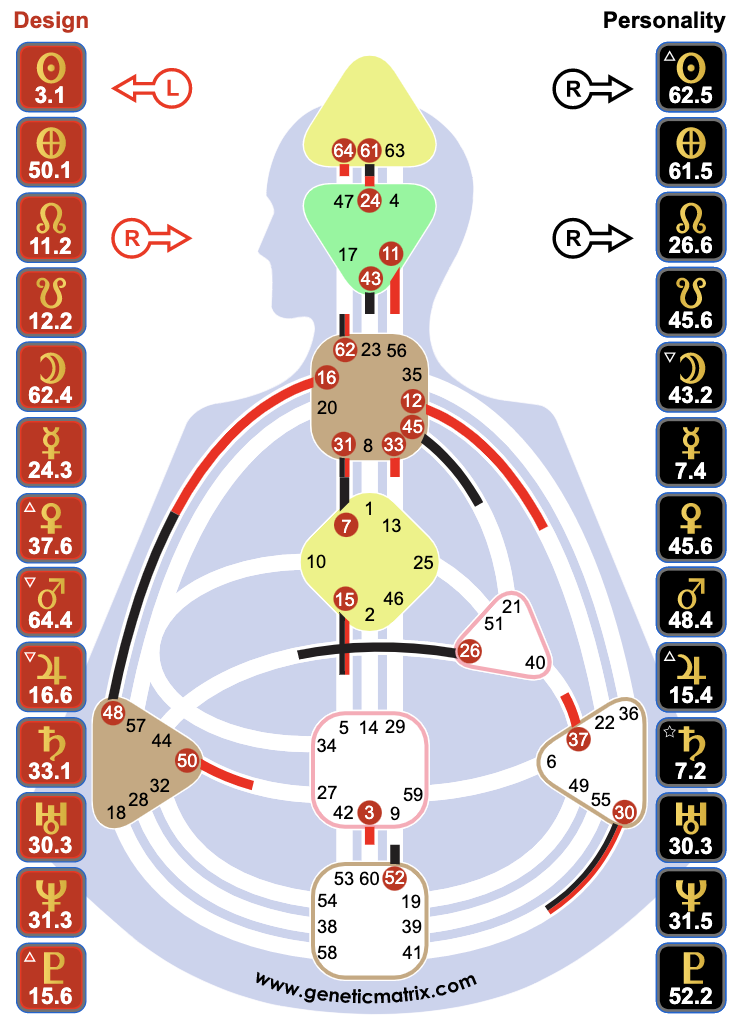 Her beauty and shy demeanour—earned her the nickname “Shy Di”—made her an instant sensation with the media and the public.

“Princess Di” rapidly evolved into an icon of grace, elegance, and glamour. Exuding natural charm and charisma, she used her celebrity status to aid numerous charitable causes, and her changing hairstyles and wardrobe made her a fashion trendsetter.

You will see in her chart that Gate 39, the gate of Provocation, holds a lot of weight having her personality sun and her design mars landing in this gate. This gate is here to provoke spirit (and the emotions) of others. Maybe there was actually too much provoking (from the royals point of view)? She certainly captured the heart of the world.

Another interesting Gate is gate 48 which is the gate of depth. The position here being in her design earth which is connected to her soul. This gate carries a fear of inadequacy; which could only have been highlighted within herself on such a public stage, especially with the sensitivity of a Projector.

Behind the scenes, however, marital difficulties between the princess and prince were growing. Diana struggled with severe postnatal depression, low self-esteem, eating disorders, and the mounting strain of being constantly pursued by both the official media royal-watchers and the tabloid press, particularly the paparazzi.

At Diana’s funeral Sir Elton John performed a version of his classic song “Candle in the Wind". 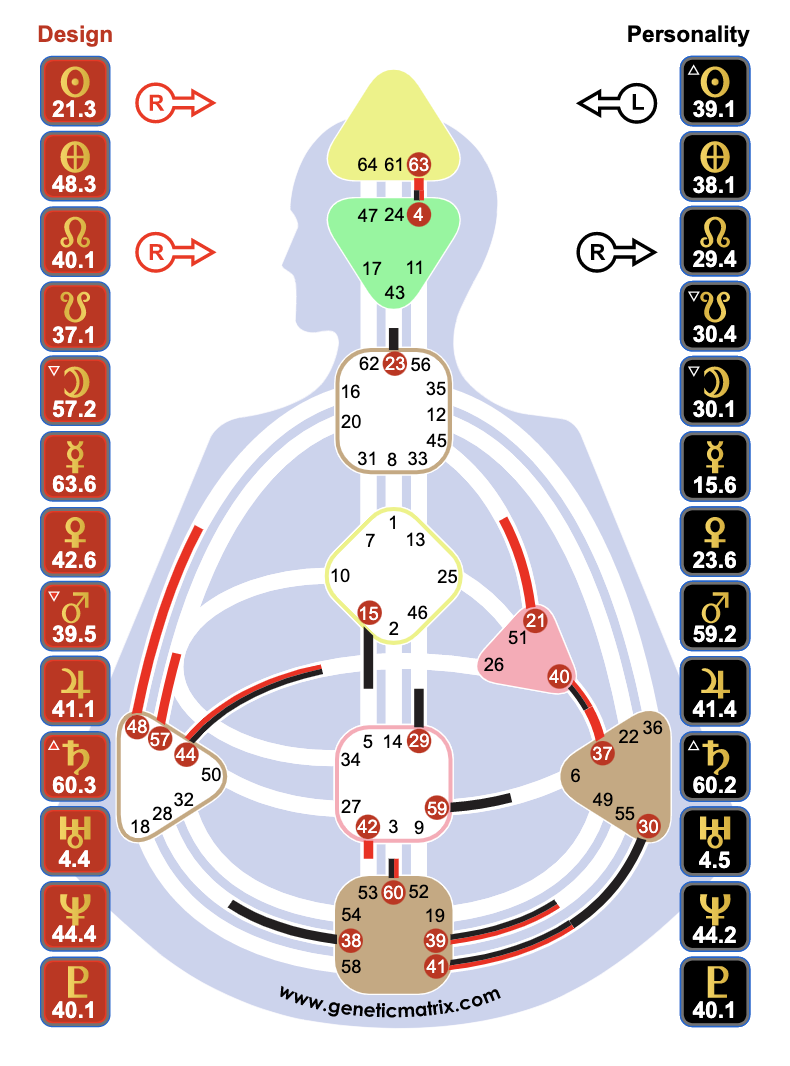 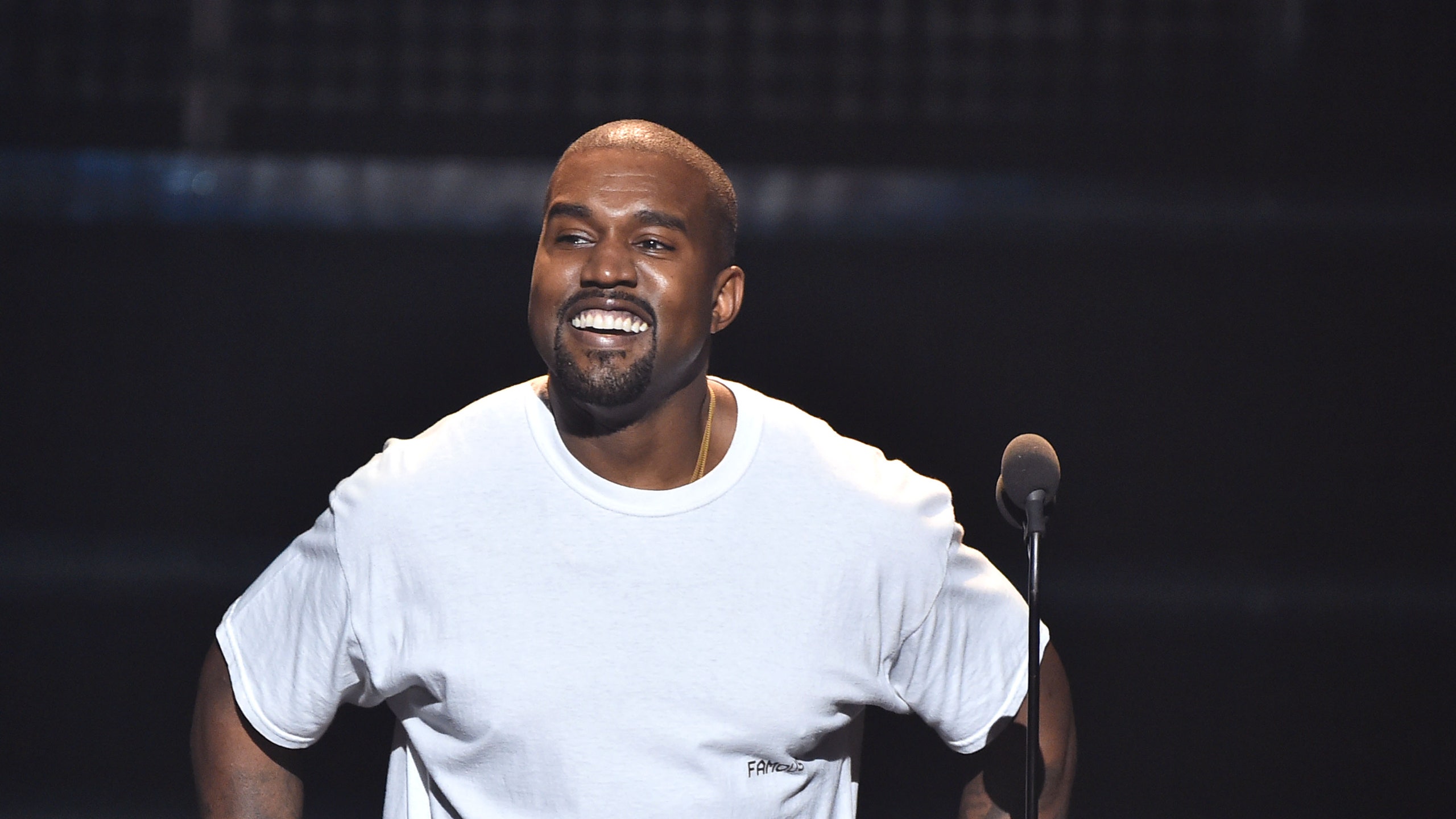 Kanye is a BRILLIANT example of a 1/3 Projector. Rather often, we can see the ‘unconscious’ part of someone’s profile playing out loud and clear, whereas they may not notice it so much. We see Kanye live out his 3rd line rather often. He tries things that sometimes really, really work for him, then other times it may appear to us (the public) that he’s failing miserably.

You can see his 1st line shine through in his music, he goes into solitude and plans out how he wants things to sound and feel, gets into the zone and then when he’s ready to share it just bubbles over and he puts it all out there to the world.

I also recently listened to a podcast of Kanye talking with Joe Rogan and I got an deeper insight into Kanye's mind. Lets just say it's definitely a line 1 mind ;) very intricate and a lot of thought goes into his beliefs and understands of the world.

You can also see the brilliance, uniqueness and at times oddness of a Projector shine through this soul.

Having a total open G centre also lends itself to not fully knowing or having a fixed identity. Kanye definitely shifts and changes continuously and evolves into new projects, beliefs and expressions of himself. 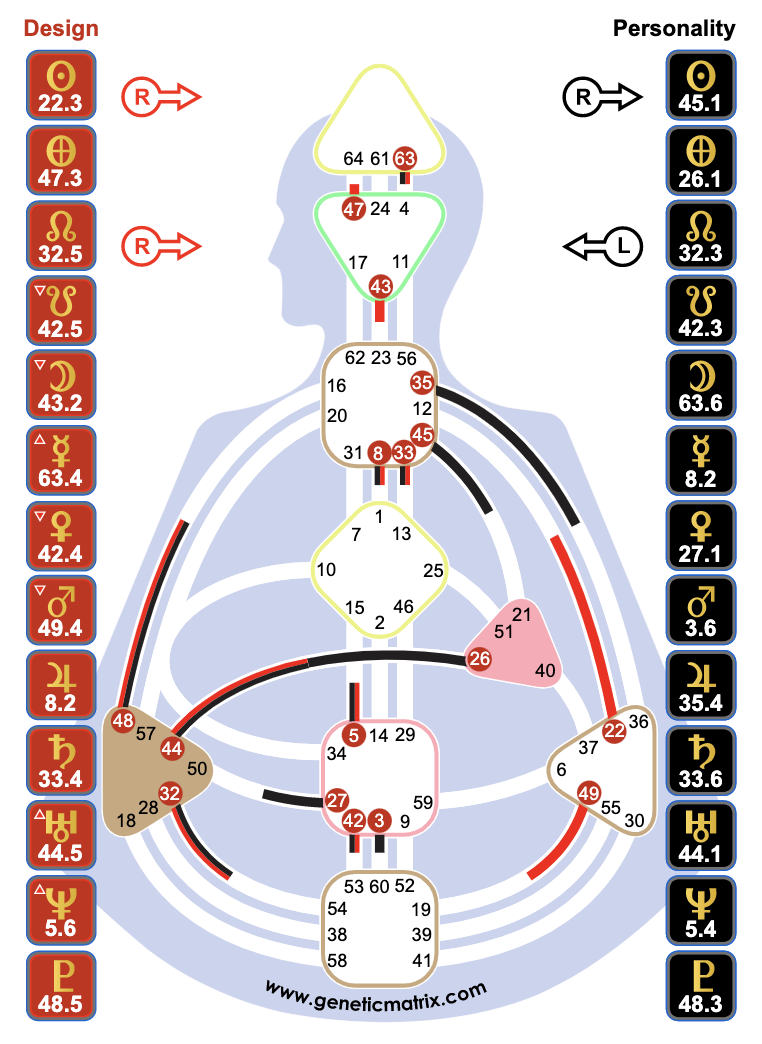 Taylor being a 5/1 Splenic Projector once again lends itself to a LOT of projections from others. There is often a maturing over time with this profile, understanding that at times less is more, quality over quantity and knowing when to shine and when to take a pause.

Taylor is most likely very sensitive and also VERY intuitive being both SPLENIC as well as having the channel of surrender from the splenic centre to the heart centre. 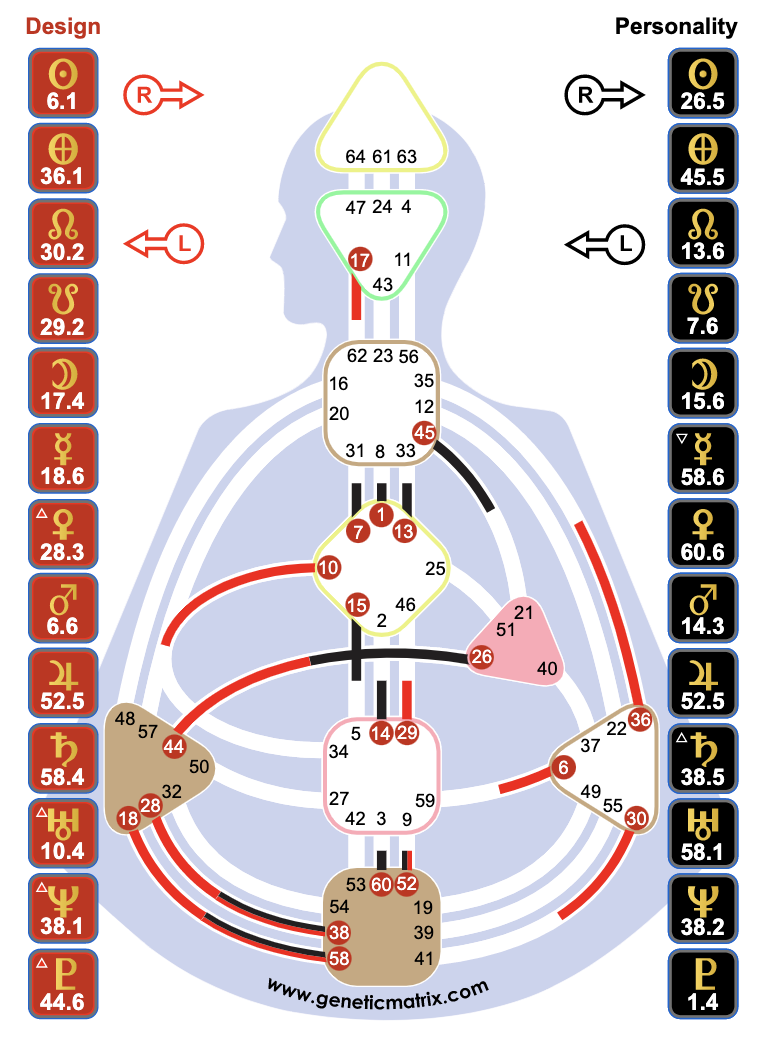 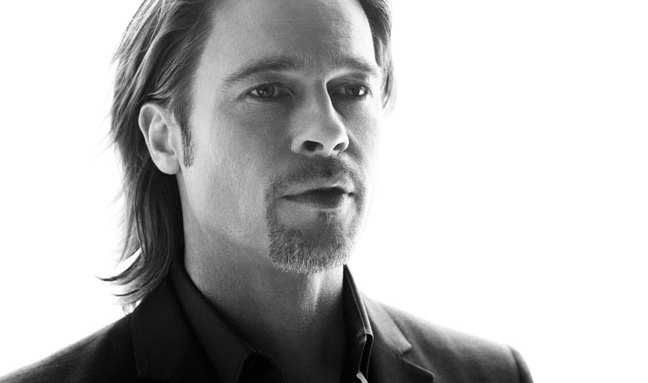 A fascinating person to look at to shine a light on the 4/6 Projector!

Brad Pitt has had many different relationships through the course of his life and it seems as though most of them happened through his network, whether they were co-stars in movies or he was introduced to them via a friend.

4th line people feel safe when they have something else ‘lined up’ (for lack of better wording!) before they finish with something, be it a job or relationship. It’s subjective, yet fascinating, that while Brad Pitt’s marriage to Jennifer Aniston was over before he started his relationship with Angelina Jolie, it all happened around the time he was filming a movie with Angelina, which could have seen his 4th line energy playing out in how that relationship started.

Most of Brad’s work opportunities have come through his network and people he knows. There was immense trust built up from both parties and Brad worked with many of the same people time and time again due to this deep trust.

Having 7 OPEN centres and 3 right facing arrows lets us know he is VERY receptive and could therefore tap into other energies (characters) to play them. 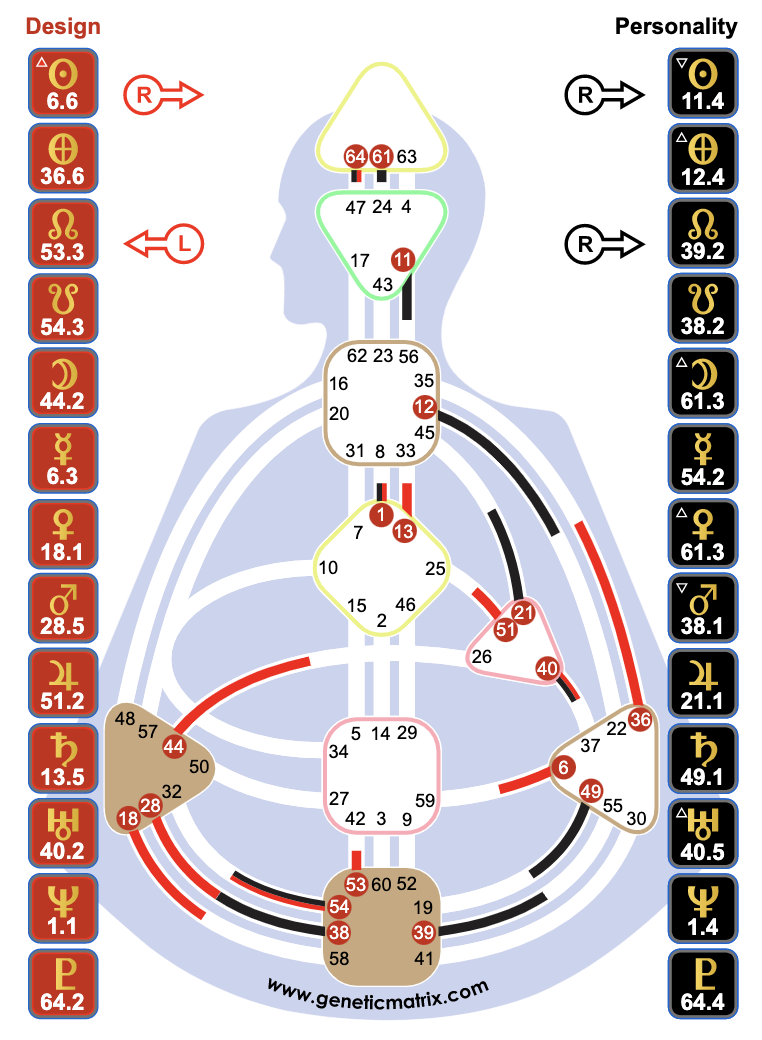 Marilyn Monroe (born Norma Jeane Mortenson; June 1, 1926 – August 4, 1962) was an American actress. Famous for playing comedic "blonde bombshell" characters. As a 6/2 Emotional Projector she was one of the most famous actresses to ever live.

Born and raised in Los Angeles, Monroe spent most of her childhood in foster and an orphanage; she married at age sixteen. By 1953, Monroe was one of the most marketable Hollywood stars. Having Gate 53 in her North Node position, the gate of new beginnings, can take someone into a place of super abundance, this clearly happened at an early age. 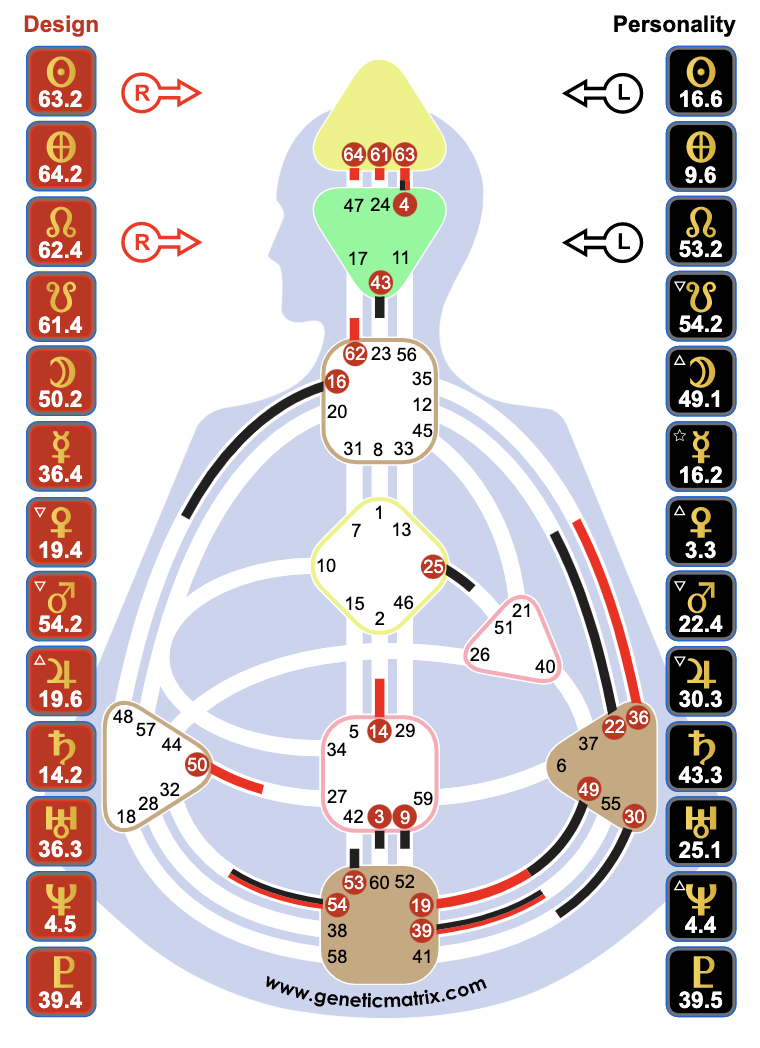 Taking on the expectations (5/1 Profile) and responsibilities of a nation and beyond, Queen Elizabeth II was here to be influential and to always be on lookout for possible ways in which she could make life better for others (LAX Wishes).

She was well and truly here to lead people through new beginnings and experiences. Her words often offered many people a comforting continuation between traditional values which she carried into the present and future. She was here to make her own individual and influential contribution . She could appreciate both the everyday interactions and those who meant the most to her and stored the memories of the people she met who told her their stories.

She was focused on maintaining personal privacy and retreating away until the timing was right (5/1 Profile, Caves Environment) and this was demonstrated by the fact she maybe did 1 or 2 interviews over 70 years!!! 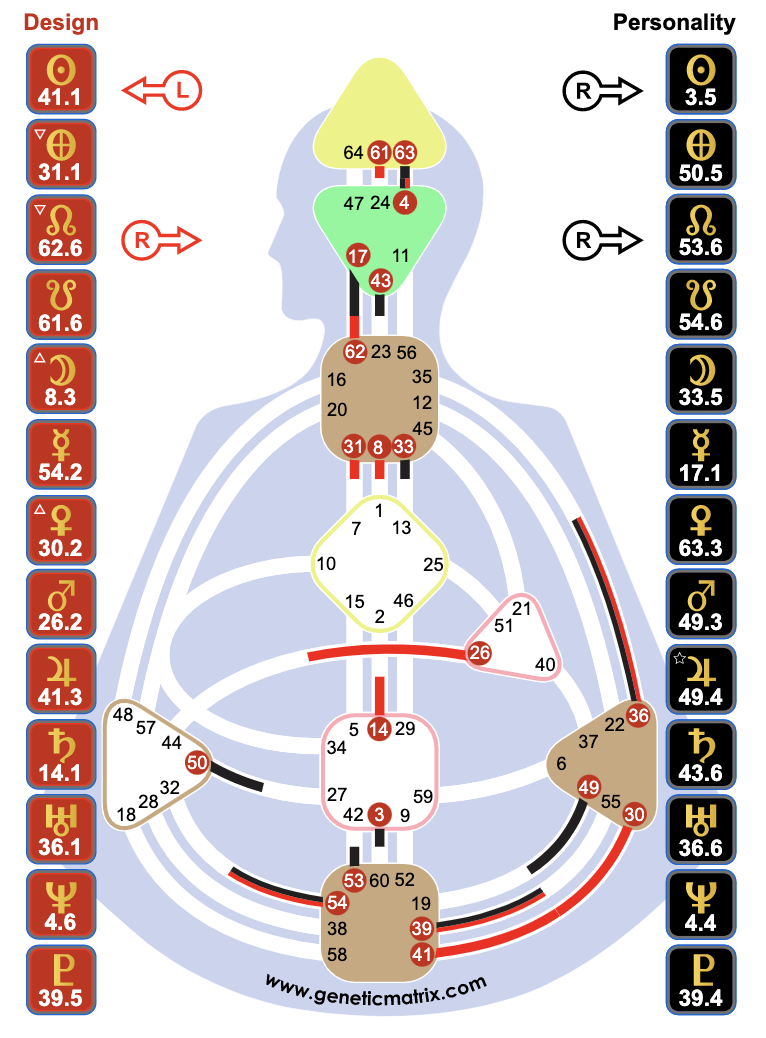 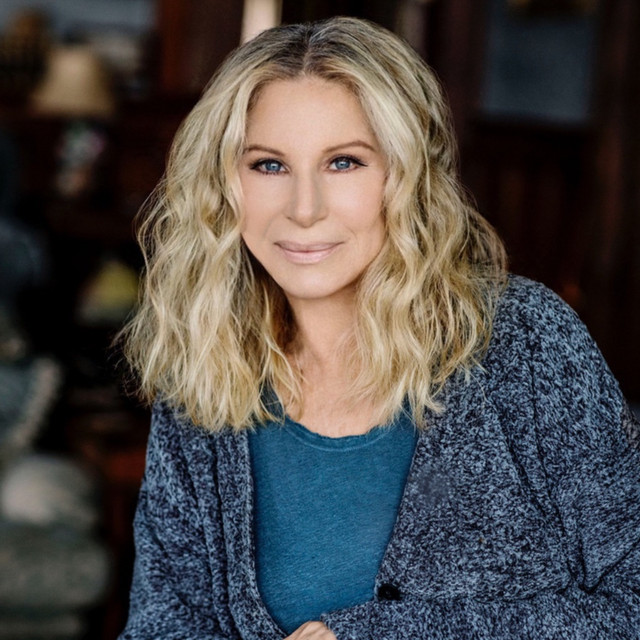 What a brilliant public figure example of a 2/4 Projector!

Before her career started, Barbra was known in her neighbourhood as ‘the girl with the great voice’, she would practice singing in the hallway of her apartment building. This is a brilliant depiction of a Line 2 energy being ‘the window’. Everyone around her would have been able to hear and see her practicing her gift!

She started to receive invites from those around her to sing at weddings and events at a young age.

I wanted to include this wonderful piece of information written about Barbra that we discovered on Wikipedia:

“Even though she can't read or write music, Barbra hears melodies as completed compositions in her head. She hears a melody and takes it in, learning it quickly. Barbra developed her ability to sustain long notes because she wanted to. She can mold a tune that others cannot; she's able to sing between song and speech, keeping in tune, carrying rhythm and meaning”

She is being brilliantly described for her Line 2 gifts from someone in her network. How incredible that Barbra is reportedly one of the best selling recording artists of all time which she achieved through harnessing her 2nd line gifts and not worrying about the things she ‘couldn’t do’, which in this case is being able to read or write music. Utterly fascinating! 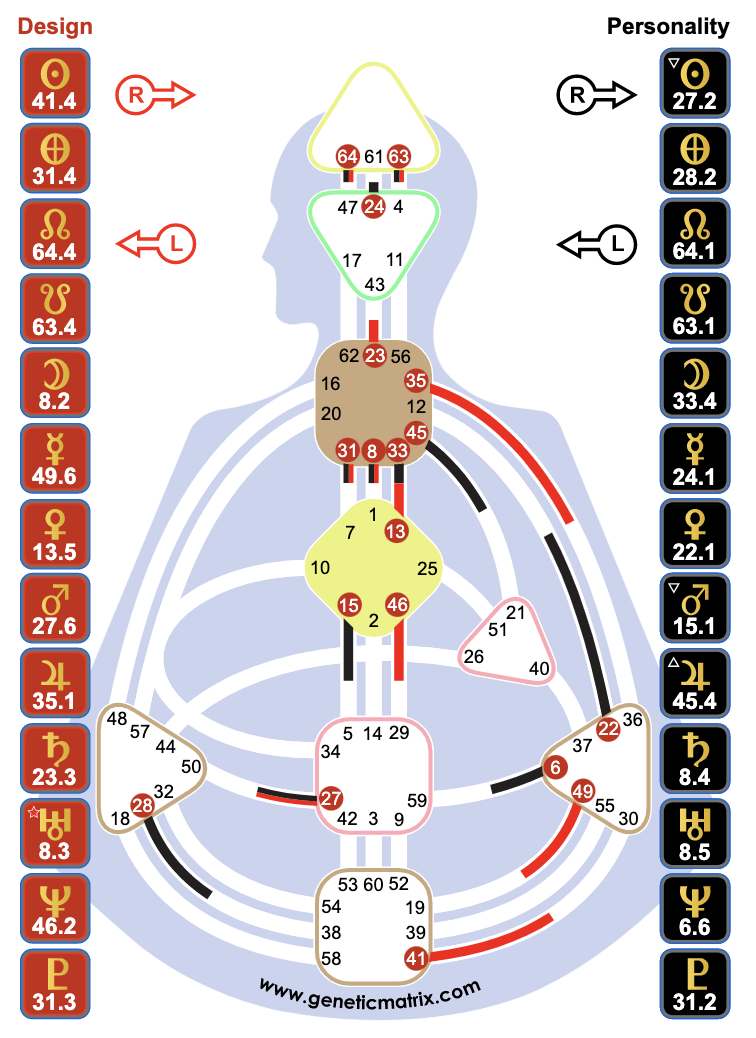 Michael Joseph Jackson (August 29, 1958 – June 25, 2009) was an American singer, songwriter, dancer, and philanthropist. Dubbed the "King of Pop", he is regarded as one of the most significant cultural figures of the 20th century. Over a four-decade career, his contributions to music, dance, and fashion, along with his publicized personal life, made him a global figure in popular culture.

Jackson is one of the best-selling music artists of all time, with estimated sales of over 400 million records worldwide.

Jackson lived to 50 years of age.

As an Emotional Projector with 7 open centers gives understanding to his deep sensitivity, almost seen as other worldly or childlike. Jackson has one of the most open chart you can get.

With a total open root center as well as Gate 40 in his personality sun position there + other elements within his chart there is signs that could lead to total exhaustion and burn out.

Being a Projector gives us all a STAR like quality and MJ demonstrated that quality like a shooting star. 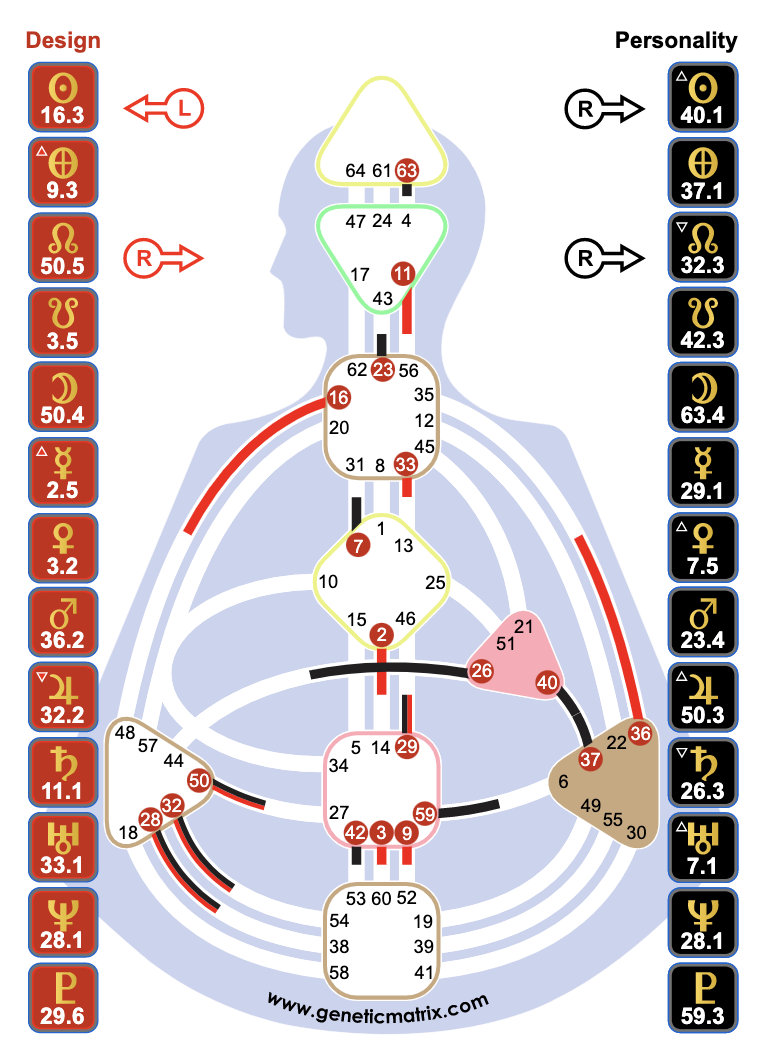 Such an interesting person to look at with this energy. A big part of the third line energy is bonds made and broken. Moving through life and often through multiple relationships. This can be romantic, platonic, friendships…anything!

Mariah has moved through many different romantic relationships in her very public life. Her first marriage is often described as very tumultuous, something that is not uncommon in third line beings. Each relationship looked very different to the last. A true ‘experiment’ of finding out what works and what doesn’t. This rocky energy even extended to her family. She no longer speaks with her brother and sister after years of bumpiness.

I can’t imagine that living life on a global stage with a 3/6 profile is smooth, however it’s very easy to see how much of a role model she is musically to her fans. Every ‘win’ is on display for her, as is every so called ‘failure’. Combine that with her Projector energy and it’s easy to see why she burnt out in the early 2000’s. 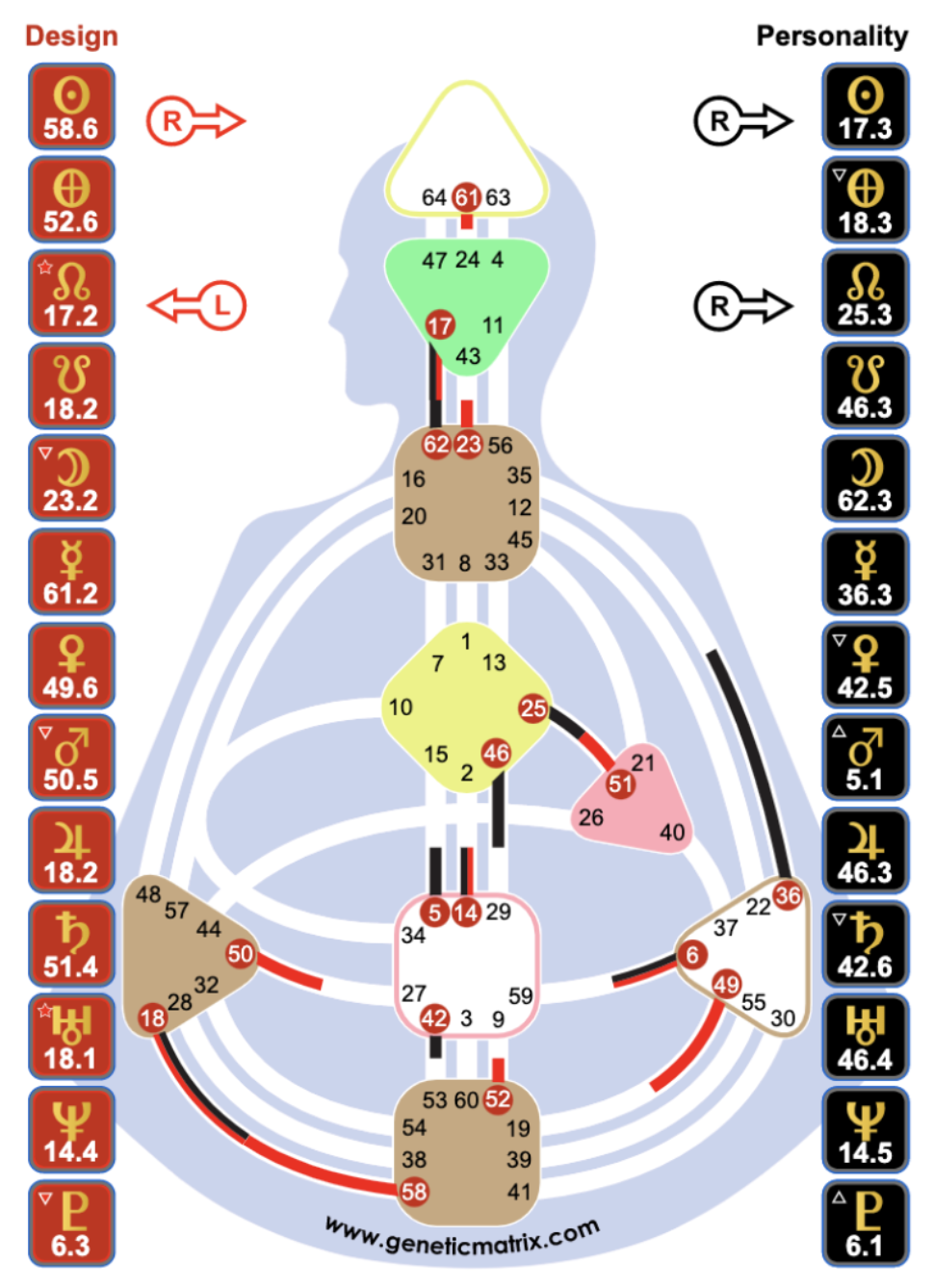 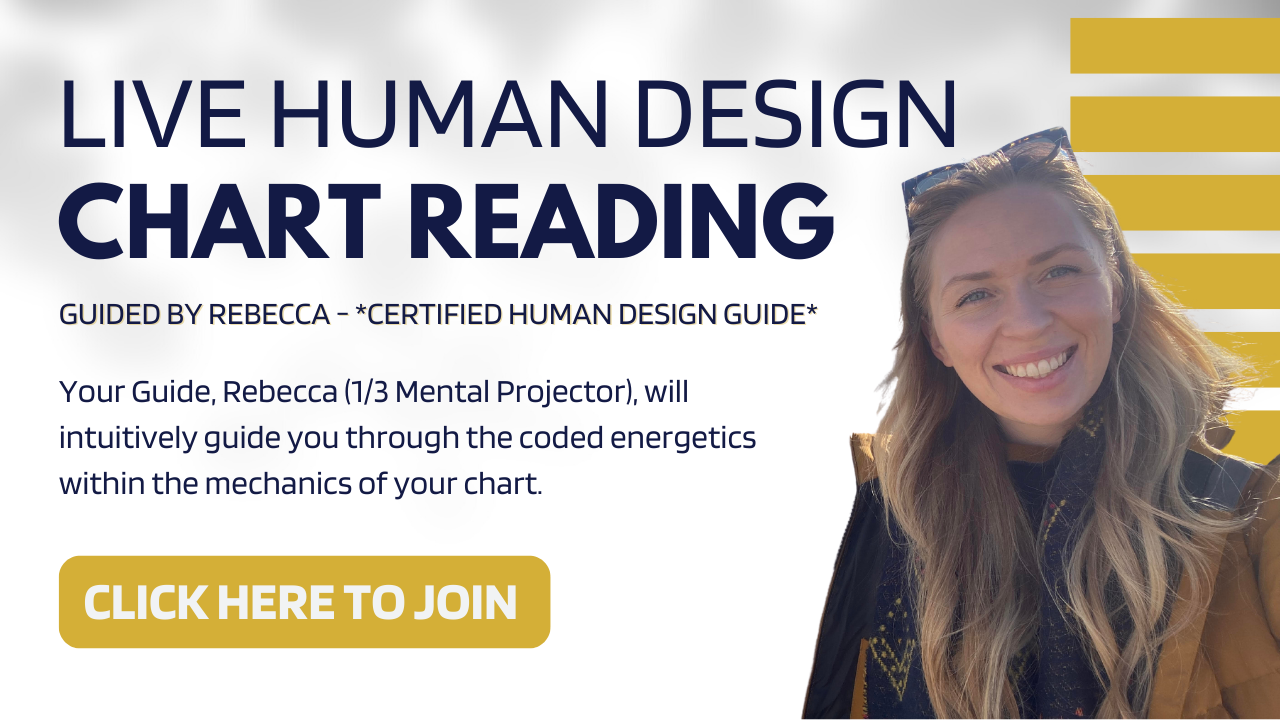 Give Sarah 4 weeks to transform your relationships through both open and direct guidance… because as Projectors we are here to do things totally differently. 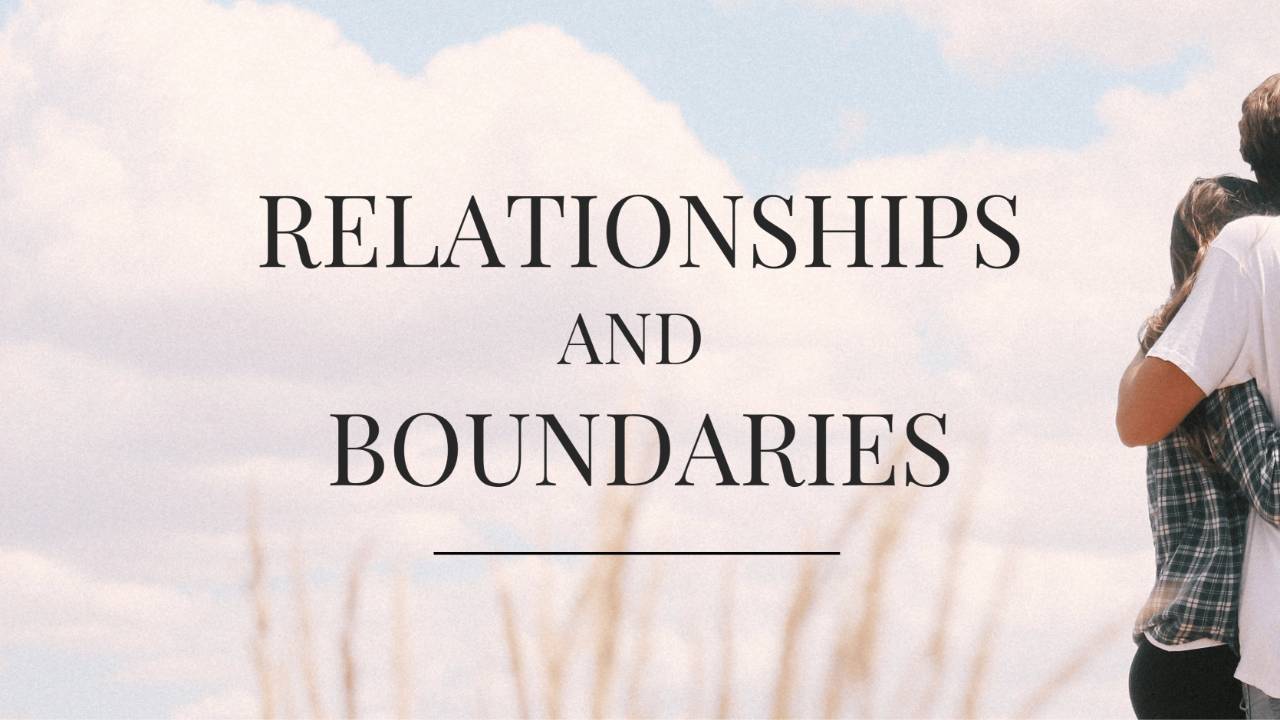